Texas may have dropped its second game of the season already, but the Longhorns still control their own destiny. No. 25-ranked Texas probably needs to beat No. 12 Oklahoma State on Saturday if it is to keep its Big 12 title aspirations alive. Conference championship implications aside, it is crucial that head coach Steve Sarkisian’s Longhorns get themselves back on track and avoid a two-game skid.

Oklahoma State has given Texas fits in the past, but the Longhorns have actually won two straight over the Cowboys. Last year under Tom Herman, Texas came back to beat then-ranked No. 6 Oklahoma State in Stillwater, despite OSU having 243 more yards of total offense, racking up 400 yards through the air. Current Cincinnati Bengal, and then-Texas edge rusher, Joseph Ossai clinched that game in overtime with his third sack of the day.

A win over Oklahoma State could put Texas back on course to punch its ticket to Arlington for the Big 12 Championship Game in December. But a Horns loss on Saturday will mean they fall out of the AP Top 25 again and fade into 4-3 obscurity.

When Texas has the ball

First-year starting quarterback Casey Thompson and true freshman wideout Xavier Worthy keep the chains moving through the air, while ESPN Midseason All-American Bijan Robinson complements them in the backfield. Both Thompson and Worthy went off in the loss to Oklahoma, with Thompson throwing for 388 yards, five touchdowns and no turnovers, and Worthy racking up 261 yards and two touchdowns. Worthy even torched the OU defense for a 75-yard house-call on the very first play of the game.

XAVIER WORTHY TURNED ON THE JETS 💨

Texas scores on the first play of the game

Last time Texas played at DKR, Thompson picked up 303 yards and five touchdowns through the air, while Worthy hauled in three of those touchdowns. The two even linked up for a 62-yard touchdown, with Worthy putting three Red Raider defenders in a spin cycle.

Maybe “the best player in the sport,” according to ESPN’s Kirk Herbstreit, Robinson has rushed for over 100 yards in five of Texas’ six games this season. The Longhorn starlet rushed for 137 yards and a touchdown against Oklahoma last weekend, and also produced this magic in the open field.

“This kid may be the best player in the sport. This kid is big time.”

BIJAN ROBINSON, WHAT A RUN 😳 pic.twitter.com/oxWpxlfplT

But this Texas offense isn’t all just ankle-breakers and touchdowns — question marks on the offensive line remain. The o-line lost one of its leaders, Denzel Okafor, for the season, and was complicit in Texas’ nightmare second half last weekend. The Horns also lost star receiver Jordan Whittington.

When Oklahoma State has the ball

Oklahoma State no longer has Chuba Hubbard, the FBS leading rusher in 2019, but they do still love to run the football. This year’s starting running back, Jaylen Warren, averages the fourth-most carries per game in the FBS after only picking up 20 carries through his first two games. Last time out against Baylor, Warren ran the ball a whopping 36 times, and he’s reached the endzone on six occasions this season.

The Cowboys still have the same quarterback from last year, Spencer Sanders, but he is having his worst season to date. Last year against Texas, Sanders threw for 400 yards and four touchdowns. This year, he has only surpassed 200 passing yards on one occasion. In OSU’s last game against Baylor, Sanders went 13-23 and threw three interceptions, despite his team finding a way to get the win. Against Boise State in Week 2, Sanders went 6-13 and only threw for 82 yards.

While Sanders is struggling this season, Texas’ defense has yet to put together a four-quarter display. It took its eye off the ball late on in each of Texas’ last three games — against Texas Tech, TCU and Oklahoma — ultimately leading to a scare against the Horned Frogs and a Sooner comeback. On the other hand, Oklahoma State’s defense has been among the best in the Big 12. Led by fifth-year senior linebacker Malcolm Rodriguez, the experienced Cowboys defense has yielded the second-fewest total yards per game in the Big 12.

But Texas is playing at home. Through three games at DKR this season, the Longhorns have outscored opponents 166-53. Thompson has looked phenomenally composed when playing in front of his home fans. Robinson will come out with a point to prove after being negated in the fourth quarter against the Sooners. And most importantly, Texas’ defense may have taken the OU loss personally, and should be more eager than ever to right its wrongs this weekend. 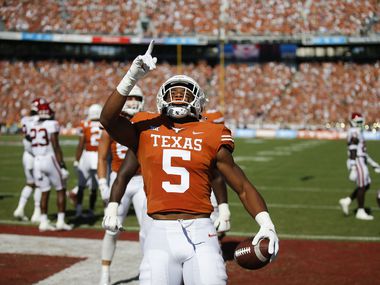 Texas prediction: Can No. 25 Longhorns correct course by defeating No. 12 Oklahoma State?

Who did Lee Corso pick on ESPNs College GameDay today?

Read Who did Lee Corso pick on ESPNs College GameDay today? by NCAA